On this page you will find information about shrubs, roses and ornamental trees 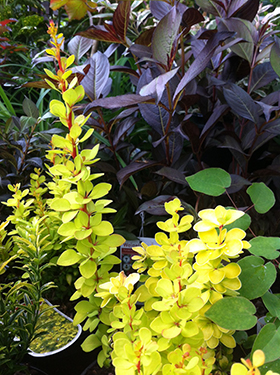 We stock both evergreen and deciduous shrubs, with many being suitable for a low maintenance garden. Evergreen shrubs will generally forgive a little neglect, especially during dry spells, and many will tolerate shade. Some have year round interest with flowers, fruits, gorgeous foliage in autumn and sometimes colourful bark that stands out when all else is grey in Winter. When almost everything else has died down, your shrubs will still be there, providing the backbone and extending the period of interest.

Evergreens have leaves in all seasons, but they are not necessarily green, Deciduous plants completely lose their foliage during the Winter, but keep their framework of branches.

Below are some of our favourites, because of their ability to withstand many aspects and conditions in the garden.

A fantastic ground cover shrub which looks good all year round: unusual conspicuous veins on dark evergreen leaves, pretty pale pink flowers from February followed by metallic purple berries (on the female plant only), and forming a low mound. It tolerates a fair amount of neglect, doesn't need feeding and will grow well in shade.

An arresting sight in Spring due to the abundance of flowers in pinks, reds and yellows, accompanied by a delicious scent. The flowers attract pollinating insects. Great for dry soils as this plant is drought tolerant. Short-lived, but will survive for longer if trimmed annually after flowering.

Such a versatile shrub: evergreen, scented flowers followed by berries, tolerant of a wide range of conditions, can be used as a wall shrub, good for wildlife – need I go on? 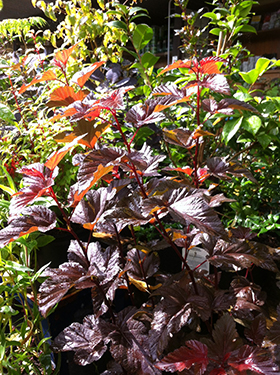 An extremely useful plant for dry, shady places, coastal situations and areas with heavy pollution, this much underrated shrub is almost bombproof! The poor thing has been brought into disrepute by unimaginative municipal planting schemes and is oft-used as a hedge around car parks. Customers all too often comment that it's too common, but I think it can look beautiful when combined with plants that contrast with the shiny foliage and splotchy leaves e.g. ferns, dwarf daffodils and Scilla siberica.

Graceful fern-like leaves, which are deeply divided and edged in red. This plant looks so delicate, yet it is hardy and will survive in shady spots – though you won't get the beautiful coloration in its delicate leaves. It gives its best in half shade and full sun. The flowers are like those from the Spiraea family, upright and fluffy. Deciduous.

If you can smell something very sweet, like Lilly of The Valley, from November onwards, it's likely to be the flowers from a nearby Mahonia: an imposing shrub once mature, this spiky evergreen belies the delicate nature of its racemes of yellow flowers, welcome at a time when most plants have given up the ghost.

A deservedly popular evergreen, compact shrub. 'Kew Green' is a male plant: you won't get berries, but the unusual scented yellow-green flowers, which last for ages, more than make up for it. It is happy in most aspects in the garden, except full sun. 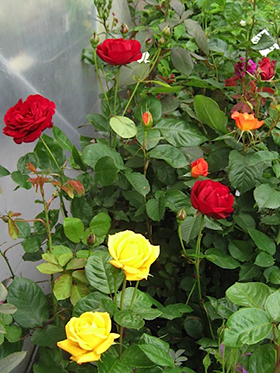 Our roses start their lives at a small family-run nursery in Northwich; choose from hybrid tea, floribunda, climbing, rambling and shrub roses. Most of the varieties we stock are scented. After a few years of unpopularity, roses are now back in fashion; they give years of pleasure and many are adaptable to most garden situations - even a wildlife garden: I love to watch Blue Tits eating the insects on my Climbing Iceberg. Roses are in stock throughout the year but there will be more choice between March and July.

From early Summer we also sell a small selection of David Austin Roses, which have proven to be more disease resistant and more floriferous.

Floribundas have clusters of smaller flowers on each stem. Both form compact bushes (with a typical height of 90-120cm). They are the most popular types of roses, commonly flowering twice; from June to July and giving a second show from late August until the first frosts.

Climbing roses and rambling roses are not the same: as a rule, climbers have large flowers, leaves in groups of five leaflets, and they bloom repeatedly throughout summer and autumn. Ramblers usually have one flowering of large clusters of small flowers, giving a mass of colour, usually in June, and they flower on the previous year's wood. Rambling roses tend to be rather too vigorous for the smaller garden, but are a fantastic sight if they are allowed to romp away over an old shed or garage. They are usually more shade tolerant than climbers.

We stock a small selection of ornamental trees from Frank P Matthews, the best ornamental and fruit tree nursery in the country.